so far my experience of being an artist is "wow everything sucks" at the beginning of a picture and "holy fuck i can draw??? sort of???" at the end

an experiment in adapting my style to colour

from the 1924 landlord's game patent, an extract from a section on chance events:

10 Caught robbing the public - take $200 from the board. The players will now call you Senator."

the steel type is wild

of the top ten combinations by resistance*, /eight/ are at least partially steel (the exceptions being normal/ghost, scoring at 15, and ghost/dark, scoring at 15.5)

*calculated by summing the effectiveness of all 18 attacking types; a lower score is better

a friend of ours released an album today, you should take a listen

hey, what's the name of the [neoclassical?] piece that starts like this

as of this writing the most common typing of pokemon is currently pure normal, at 69 species. this is followed closely by pure water at 68, and by pure grass at 43.

the most common dual typing is normal/flying with 26 species, being the eighth most common typing overall.

is there a way to get `git describe` to only show the commit hash if it's different from the tagged commit?

update: yes, it's the default behaviour.

is it a good replacement for notepad++?

wikipedia says todd howard worked on video games before being hired by bethesda, but it doesn't mention them in the list of his work, and the sole citation they link to is dead

so for all intents and purposes the guy just spawned one night in the bethseda offices, announced he was the new upper management, and nobody dared to correct him

does anyone have any recommendations for pokemon romhacks?

due to the present circumstances, our notifications have been set to mutuals only for the time being.

anyway, whitelist federation should have been the default from the start

a musician friend of ours is looking for game ost work:

thinking, again, about how the world we live in reads like an episode of TOS star trek

we have almost unlimited power at our fingertips - more than enough for everyone to share and live comfortably - but crusty old men chose to use that power to build moloch, and sacrificed the whole world to it for their entertainment

we like toml, so we're going to use that

wait, that's not cool at all! it fucking sucks!

video on roblox and how it exploits its child devs 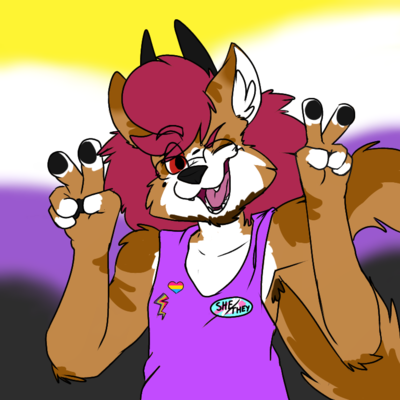